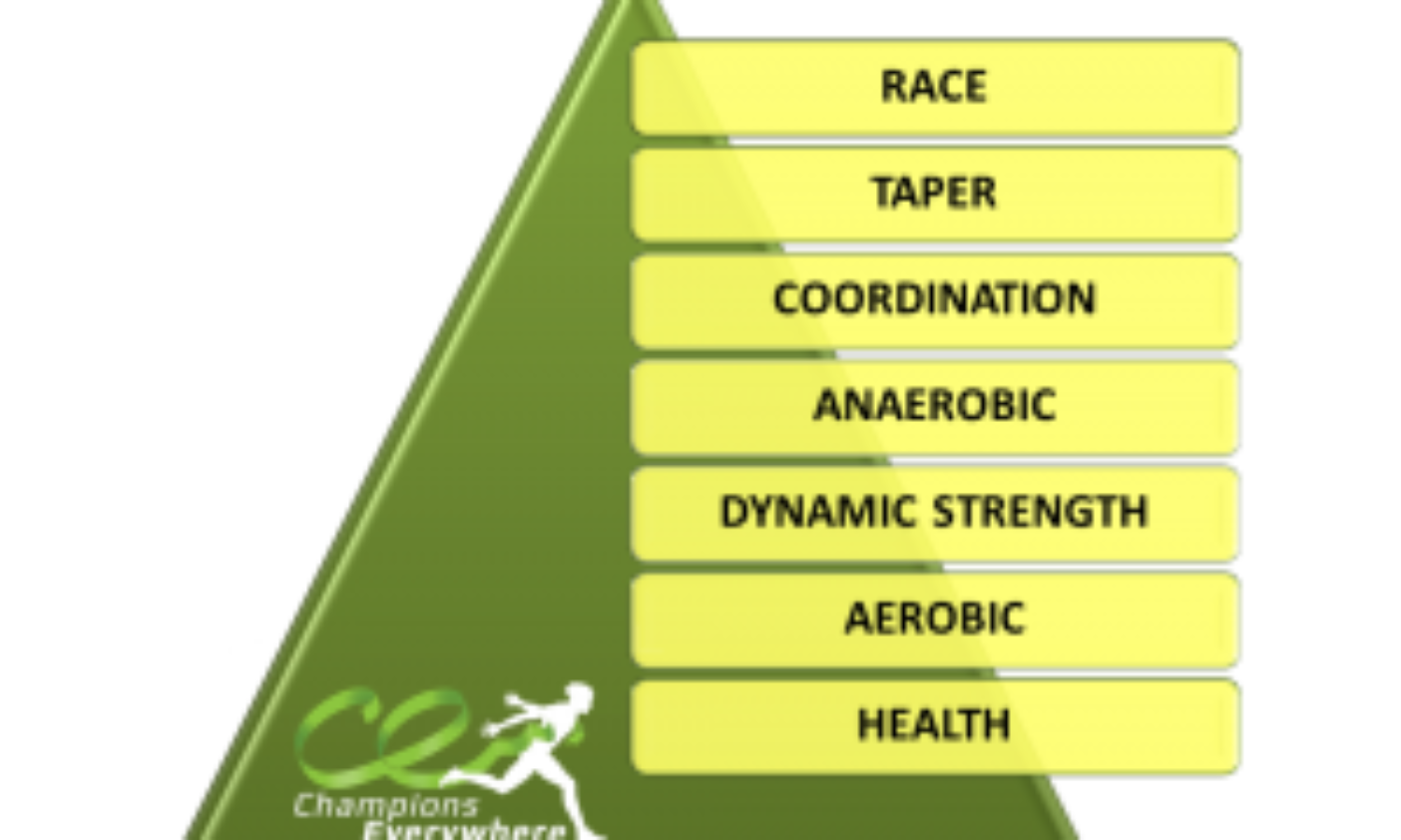 Is your sport soccer, GAA, rugby, hockey, volleyball or another team sport? If so you may be wondering what our site can offer you apart from Orbana and advice on nutrition. Surely, the physical requirements of team sports fundamentally differ from pure endurance sports and the Lydiard training philosophy cannot be applied?

The opposite holds true and this article will show you how to apply our training philosophies to create a team of tireless players. As a team sports coach or player your enemy #1 is fatigue and no system better prepares your defenses against this enemy than Arthur Lydiard’s. When your players fatigue the following happens:

You can have a very gifted team with well-laid out tactics and yet be defeated by a better conditioned opponent who can play in their best gear throughout the match. Teams such as Tipperary’s county hurlers have shown emphatically the importance of being able to run and fight until the end. Our coaches can help your team evolve to this tireless state. Let’s have a look at how we do it:

How to apply Lydiard training

Compare our standard training programme phases on the left below with the specialised team sports phases to the right: 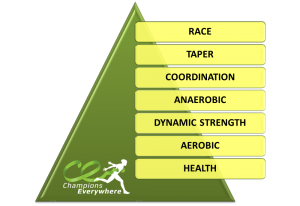 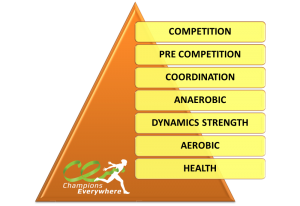 It should stand out that the pyramids are essentially identical: there is only one correct order in which to develop the physiological energy systems; the only real difference lies in the detail. Rather than a taper followed by a racing season (as for endurance athletes), team sports players have a short pre-competition phase followed by a long competitive season.

In both instances, the objectives are the same: to develop a high aerobic foundation and then introduce more and more specific endurance training for the sport. Where a middle-distance runner may have short time trials on the track as part of his final coordination training, a GAA player would have workouts that are game- and position-specific such as the famous 30/30 drills (30 seconds sprint, 30 seconds jog) mirroring the “stop-go” requirements of team sports with a running clock, particularly those played within small areas or with a large amount of players relative to the space (such as hockey, ice-hockey and indoor football).

What are the energy demands of the sport?

To evaluate how to balance the late stages of your team sports programme, we look at the general energy requirements of your sport: e.g. “how aerobic or anaerobic is your activity?” We do this by looking at how long the general duration of intense activity (sprints, running with the ball etc.) would be:

Keep in mind that activity duration will usually be somewhat mixed because very few sports have non-stop intensive activity. Rather play is broken up or the pace of the game changes changing the actual energy requirements during the game.

A more advanced method of arriving at this answer can be sought by looking at motion analysis of players. Bompa & Claro show, for instance, that international fly half rugby players spend roughly 47 minutes walking, 14 minutes jogging, 5 minutes running, 2.5 minutes high-speed running and half a minute sprinting in a game. Even rugby, a game that seems fairly explosive, sees players generally relying 60% on the aerobic energy system. With this in mind it makes sense to condition your team using the most effective aerobic conditioning system in history.

How do you plan to a season?

Apart from the greater level of technical training required, the main difference between athletics and team sports is the longer length of the competitive season: most team sports, certainly at elite level, have competitive seasons (leagues and championships) lasting nine months with only three months for rest and preparation. The longer the competitive phase the more maintenance work you have to do during the season and the greater risk that you cannot develop your team and your sport year on year. New Zealand rugby is one example of a more effective system with two breaks allowing for more preparation time.

Either way, we utilise the period of the year when you are not competing to ensure your athletes arrive in the competitive phase fully trained. We do this by taking them through the aerobic, dynamic strength, anaerobic and coordination phases during your pre-season periods. For instance, if your season starts in September, we would use June, July and August to prepare your team. Training becomes increasingly game- and position-specific as the beginning of the season draws closer.

Once the season starts, the focus is on maintaining each player’s position-specific endurance and speed. This training runs side by side with the technical, tactical and agility training provided by your specialised coaches who are experts on the detailed movements and techniques involved in your sport.

How do you know our game?

Your game-specific training remains integral and central to success in your sport. Only by practicing the specific skills and scenarios of your game will your athletes be able to consistently execute the right movements and the right plays. Physical endurance alone is not enough. We are not specialists in the technical and tactical training specific to your sport and do not profess to be. Rather what we can do is show you how to make optimal endurance development part of the overall training plan for the season in a way that complements rather than detracts and ensures that your players arrive for their peak games with the full set of abilities needed to be successful: tactical, technical and physically.

Does Lydiard training have a proven track record

Lydiard applied his techniques across such diverse sports as Gridiron, rugby, horse-racing, swimming and kayaking with extremely powerful results proving that by developing a large aerobic foundation firstly and then adding the specific physical adaptations needed for your specific discipline or sport secondly, you create a competitor with the ability to perform as close to his best level as possible for the full extent of a match or event. This becomes increasingly effective during compact tournaments with many matches in a short space of time when the aerobically conditioned athlete can recover quicker between games.

How do you gauge each player’s needs?

We use the same methodology as for endurance athletes: first we perform a physical test to understand current fitness levels. This is usually a simple 3,000m time trial to determine VO2 max. We then work with the club coaching staff to understand how your season is structured, when you train as a group, what training you already do and what your objectives are.

We use this information to draw up the phased approach to training and then generate individual training plans for each player specific both to their position and physical ability. The information will allow your players to both train together as a group during your workouts together and give them guidelines on how to keep themselves fit on days when the team don’t meet.

Is this only suitable for professional teams?

Quite the contrary, amateur and schools teams can expect to benefit more as the relative level of fitness among your competitors will be lower and your team will gain more of an advantage from being conditioned by the Lydiard system. The training can be tailored to all age groups from juniors upwards.

Could you show me some examples?

We will provide example training plans for hockey and rugby shortly and more to follow after. In the meantime, if you are curious how you can get your team in the best shape of your life, simply email our coaches. We are only to happy to come out to your coaching staff or your club and present the concept in more detail before discussing further.

← Myths: Western athletes are not as tough as they used to be
Middle-distance intervals →
X