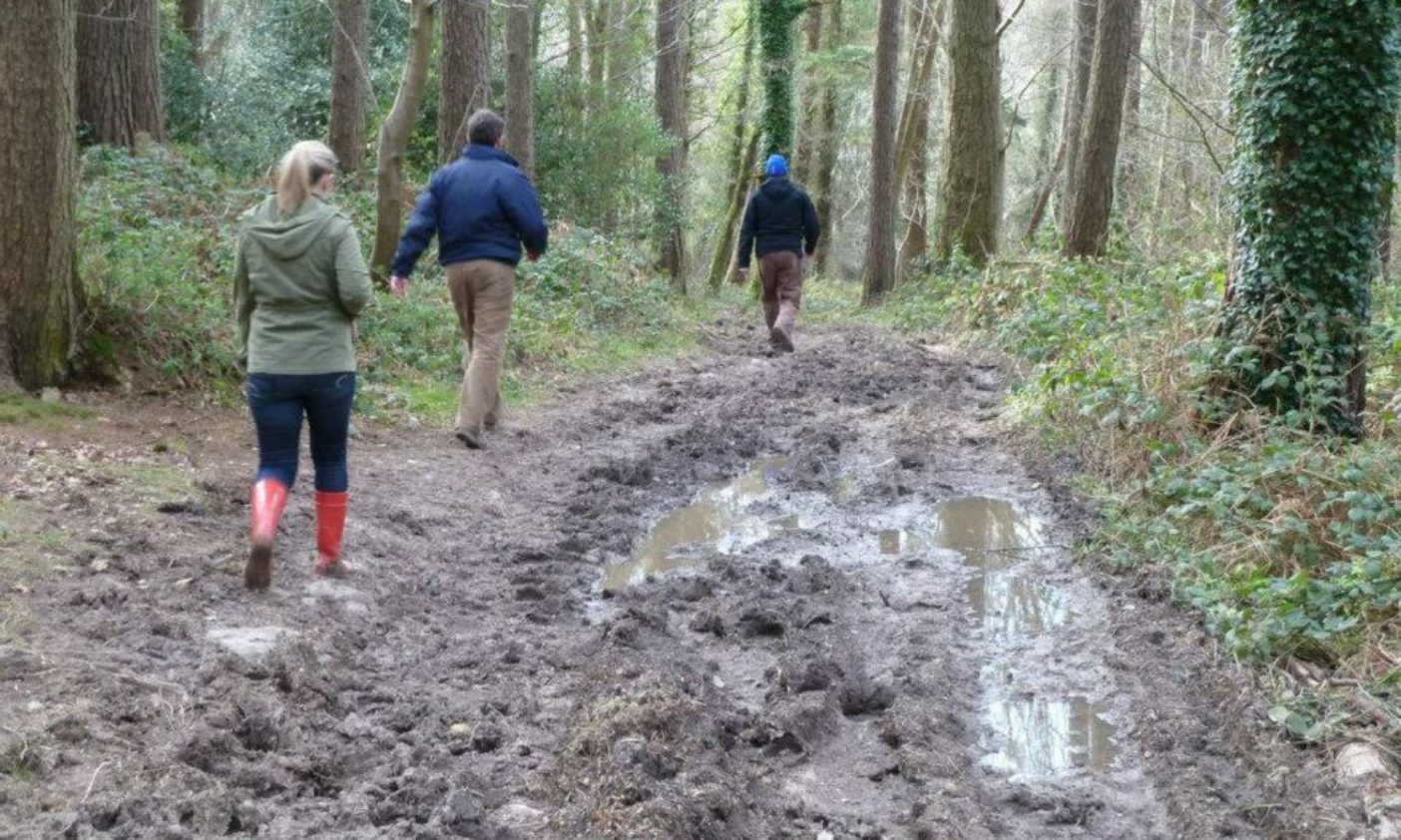 I found myself in the unlikeliest of places last weekend along with 4,000 other people, the ‘Hell and Back’ challenge taking place in Belmont Estate in Co. Wicklow. 12km of some of the most interesting terrain and obstacles I have yet had the ‘pleasure’ of running through.

My younger brother and friends had bought their entry a few months ago and they had been training to compete as a team. I heard about the race two days before it and they egged me on to do it when entries reopened after being sold out. I hemmed and hawed as I had plans to head into the mountains and do some trail running. When I eventually decided I would give it a lash it was sold out again. Luckily after getting on the phone with organisers AliveOutside they said I could pick up a ticket on their Facebook page.

So the next day (Saturday) I found myself at the start line with 30 mins to go nice and relaxed and enjoying the craic of the walled garden, the only thing was I discovered I had left my number back in the car…in Bray! The officials said I had to have it so I jumped back on a bus and after scrambling around in the car I eventually found the rogue number. By the time the bus crawled back up the entry road and I got off, I could hear the countdown to the first wave setting off. I ran up the road found a marshal and explained I had missed my wave, they pointed me in the direction from the walled garden and I set off chasing the field about a minute or more behind.

Now as a mountain runner I see paths where people see broken ankles, and when I caught up with the field I made use of this and took every rough cut I could find. I was wearing the VivoBarefoot ‘Breathos’ which are a ‘barefoot technology’ shoe, the grips are good for muddy conditions but the thin 3mm sole give plenty of feedback from the ground to ensure I keep good running technique and light on my feet. I made some serious headway early on but the first real test we encountered were some tortuous zig-zags along a steep bank, I was red lining by this stage and still couldn’t see the leaders of the field, there was a while yet to go in the race so I settled in for a few minutes to get my effort levels under control. The next noticeable obstacle was the large rock climb and the ice bath (a big skip of ice water), I did a Baywatch style dive into this and it was actually refreshing after the last 30 mins of sweating over whether or not I would make the start.

Next thing I know I was handed a pair of goggles on the way into the forest and found myself in Vietnam like territory…’Sniper Alley’! I couldn’t see the snipers but I sure felt their wrath and they weren’t giving us an easy time, I was in the top 10 at this stage. After a few painful stings on my cheeks (all four of them!) we must have “got to the chopper” and left the danger zone.

Then it was multiple rope climbs up steep mud banks and I found I was making up a lot of ground, I actually didn’t use the rope that much but opted for quadrupedal movement (hands and feet) to get up the slopes.

It was just after this I caught up with the leaders (all recent army graduates who just completed their basic training afaik) and I had a quick chat and introduced myself. The guys were physically built and going  strong and they were working as a team encouraging one another. The race leader’s (David) English accent took me aback but we pushed on together and would continue to do so for the rest of the race. There is nothing like a determined competitor to keep you on your toes.

The course was well marked out and virgin territory in most places, there are pros and con’s to this. Firstly there isn’t a worn out trail so you are relying on the organisers to have good marking and you have to make your own trail which the other 4,000 people are likely to follow throughout the weekend. Where we went through waist high grass, thorns and nettles this turned out to be a lovely path (or mud!) for the back of the field. I jumped into a puddle and with a ‘flump’ found myself up to my waist in bog and my face also went under unexpectedly, we had reached the ‘Slimy Swamp’, probably the highlight of the day. At one stage I couldn’t move, it was like being stuck in clay or cement, I found myself trying to crawl back to the top but kept getting stuck. I can imagine it was like a soupy porridge later on in the day. I was overtaken by David at this stage and he climbed the exit wall first. I caught back up with him shortly afterwards after the underground pipe crawl.

Eventually we got to a river which we had to cross four times, it was great to wash the bog and sh*te off us and I made a bit of headway here on the the lads. The forest running sections throughout the course were brilliant, difficult terrain and oodles of twisting and turning, vaulting over logs and using plenty of agility skills to stay on your feet. The course designers should really take a bow here. A welcome water break was soon followed by a hurdles course, over and under many times. With all the quadrupedal drills we regularly practice in our ChampionsEverywhere circuit classes I was very comfortable here. We eventually started the ascent up the Little Sugarloaf through the forest after many ups and downs through rivers, mud, nettles and briers and I soon felt the old familiar burn of running up a mountain. The guys were still very close and I was constantly pushing the pace knowing this was my strongest card to play on the day.

On the bus on the way home they said the views were lovely from the mountain, but unfortunately we didn’t have time to take them in, we were too busy trying to suck in as much oxygen as possible! David and myself had broken away from the rest of the field and when we got to the ‘Hades of Horror’ section I nearly broke when I saw I had to carry a block and a sandbag up and down the mountain side. We were neck and neck and I knew it would take a big effort to break him. We had one more steep hill to climb and he was just ahead of me but walking, I put on my best uphill trot and tried to make passing him look effortless. Towards the crest of the hill I put in a big push and then it was all downhill from there literally. The descent was fairly technical but the legs were still cooperating and I then pulled away on terrain that I was comfortable running on (i.e when every step is a lottery!).

What do you mean I have to carry that log?

The funniest part of the day had to be the log run. I was given a log and was told to head in a particular direction and then back. I actually checked with the marshal three times if she was serious! The route she pointed to was a ditch packed with nettles growing up to my chest! “Seriously, it doesn’t look like it but there is a path there….somewhere” She laughed. “Erm…Okay…” I said as I duly waded through hell.

The finale of the course was made for the type of training we do with our clients, bear crawl, vaulting, climbing, jumping and handling your own body weight (we don’t train our clients with electricity though!). Then I actually took a few seconds and availed of the marshal hosing down runners at the end, it was very refreshing!

The final hurdle was more like a mountain…’Mount Olympus’ in fact. A quarter pipe wall going about 20 foot high. A final sprint up it and I managed to grab the ledge and pull myself over. I didn’t actually take in that it was the finish, I was a surprise when I heard the crowd and the announcer shouting. I took a few moments to get my bearings before sliding down to finish in the walled garden where a bunch of crafty miniature snipers drowned me again with water guns. I had won in a time of 58:59 which was the fastest time of the weekend.

A great day out and a great test of your body’s capability of handling functional situations, all round fitness is a requirement, and those who specialise in any one sport will find it tough to bluff their way through. I would love to tackle it again as part of a team. The camaraderie shown out on the course was amazing, between teams and also competitors. Well done to the organisers, a very professionally run show and I hope they keep aiming to improve with each race they hold.

Jason Kehoe is co-founder of ChampionsEverywhere and a distinguished mountain runner. A Lydiard Foundation Certified coach and natural movement advocate he competes in road races, cross country and regularly in the mountains where he rose from a mid-pack runner to leading the pack after following Lydiard’s training principles. He teaches natural movement principles with clients and counts movement experts Tony Riddle and Ben Medder among his mentors.

Editor’s note – where you can learn this:

Ed: Jason’s victory makes it “two in two” for CE Squad athletes at Hell & Back after Richard Healy won the event in 2012. Richie is also an “alumni” of our “Masters of Running” programme which helps runners condition themselves through natural movement and old school training principles. It is no coincidence that this “hunter-gatherer” strength can perform well on obstacle courses – much of our coaching on this topic is derived from Georges Hebert, who invented the first obstacle courses, yet his teachings are now widely forgotten.

So if you are looking for an alternative to training in the gym for your next event , consider: