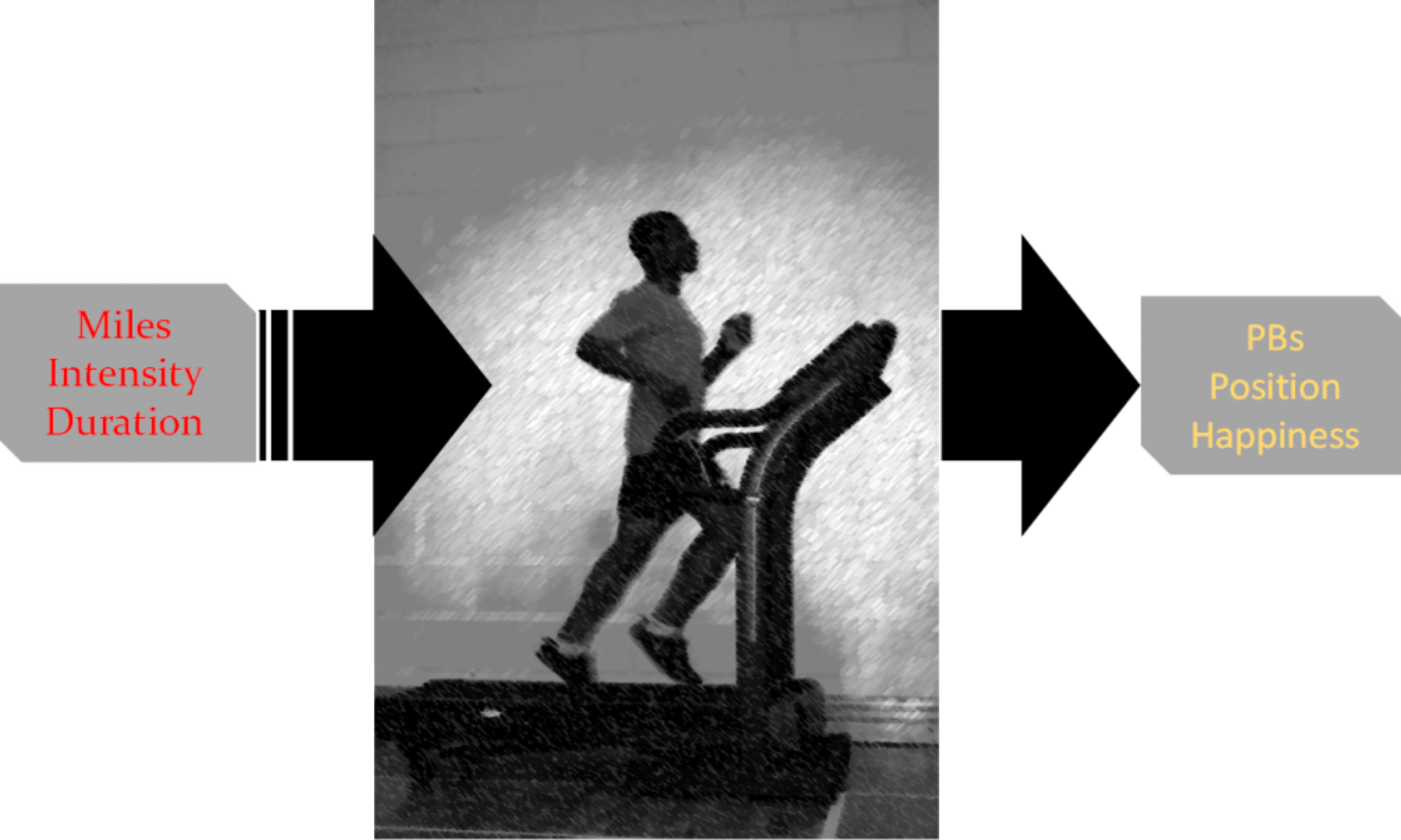 Imagine yourself at the centre of a process that has inputs and outputs. The inputs are the training challenges you expose yourself to: time, miles, intensity, complexity, terrain and so on. The outputs are the outcomes and the results – the PBs, the times, the finishing positions, how fresh you feel, how strong you feel and so on.

My observation is that today many of us have been caught in a trap where we mistake the inputs for the outputs and that can have serious consequences – injury, dissatisfaction, stress or under-performance.

I had been a prime offender myself, the terrible running mechanics I had before meeting Tony Riddle combined with an obsession about inputs (miles, miles, miles, splits, splits, splits) and lead to four years largely wasted on the sidelines when I could have been running, competing and been happy. Instead my running became a source of frustration.

As the ChampionsEverywhere coaching model took shape, I began to look into ways to change this mindset. This is not easy: a mindset is like a habit. You have to be clever to break it.

Start with the end in mind

In the our Coaching Manual we dedicate a whole chapter to how to stop measuring inputs and rather measure your outputs but since it is still in a big hand-written leather-bound tome, I’d like to share one simple method with you so you can begin the change. Here are the steps we employ with our athletes:

Negative answers allow you to ascertain whether you are getting the right “output”. You won’t get the benefits of some sessions in the same way as you do them but performing well each week shows that your running abilities are not diminishing and that you are fit, healthy and capable. It also establishes a consistent routine of preparing for peak race, week on week and shows you early signs of accumulating fatigue.

The odd “fluke” should not rattle you. Life happens but evaluating output allows you to adjust the coming week upward or downward. Two bad “race specific” workouts could be certain signs of accumulating fatigue, increasing stress levels, insufficient recovery or your current plan piling on more training load than you can absorb.

If you are a beginner you can still use this approach although you may want to read up on the literature or work with experienced fellow runners or coaches on what are good strategies for adapting your plan when you can see that your OUTPUTS are suffering.

So the next time you draw up a training plan, try to review the OUTPUT of each week rather than be obsessed with the INPUT (miles, miles, miles). We found it to be a subtle change with big implications.

Example – Base phase for a marathon runner

Imagine you are a marathon runner and you have identified that you need to work on your endurance first. You may have a three week block of training in which your race specific workout is a steady run starting at one hour. Let’s pretend you ran 80 km in the previous week and managed a steady run of 60 minutes running at 3:58 min/km pace.

Your second week looks like this: if you are an INPUT-focused runner you will look straight to the big number on the left.

Say your goal was 85 km. Seeing 88 km accomplished, you consider the week a SUCCESS! But let’s say your performance in Saturday’s workout was a struggle or that you had severe muscle pain in the days after, perhaps even some old niggles acted up. Also, your pace was no better, actually a bit worse.

From blind training to response-driven training

The INPUT-focused runner often pushes on relentlessly at this stage. Next week’s target may be 90 km. The OUTPUT-focused runner is better positioned to avoid this trap: for them the 88 km done is a merely a tool, not something to celebrate on it’s own. The poor showing on the Saturday combined with tiredness and increased soreness suggests a change of plan is due the coming week.

A seasoned runner, or one with the help of an experienced coach, will be able to look back at the week and see what may have gone wrong. Perhaps he noticed that Thursday’s fartlek was simply run too hard and too long. A simple adjustment of toning down Sunday’s long run and ensuring the mistake is not repeated in the following weeks course-corrects and next Saturday’s workout sees an improvement.

So try this for your next training build-up: keep your eye firmly fixed on OUTPUTS and only use the INPUTS as coins in a slot machine – just something you put in to get out the results you hope for!

← Jason Kehoe wins “Hell and Back” with fastest overall time
Should cadence increase in sprinting? →
X