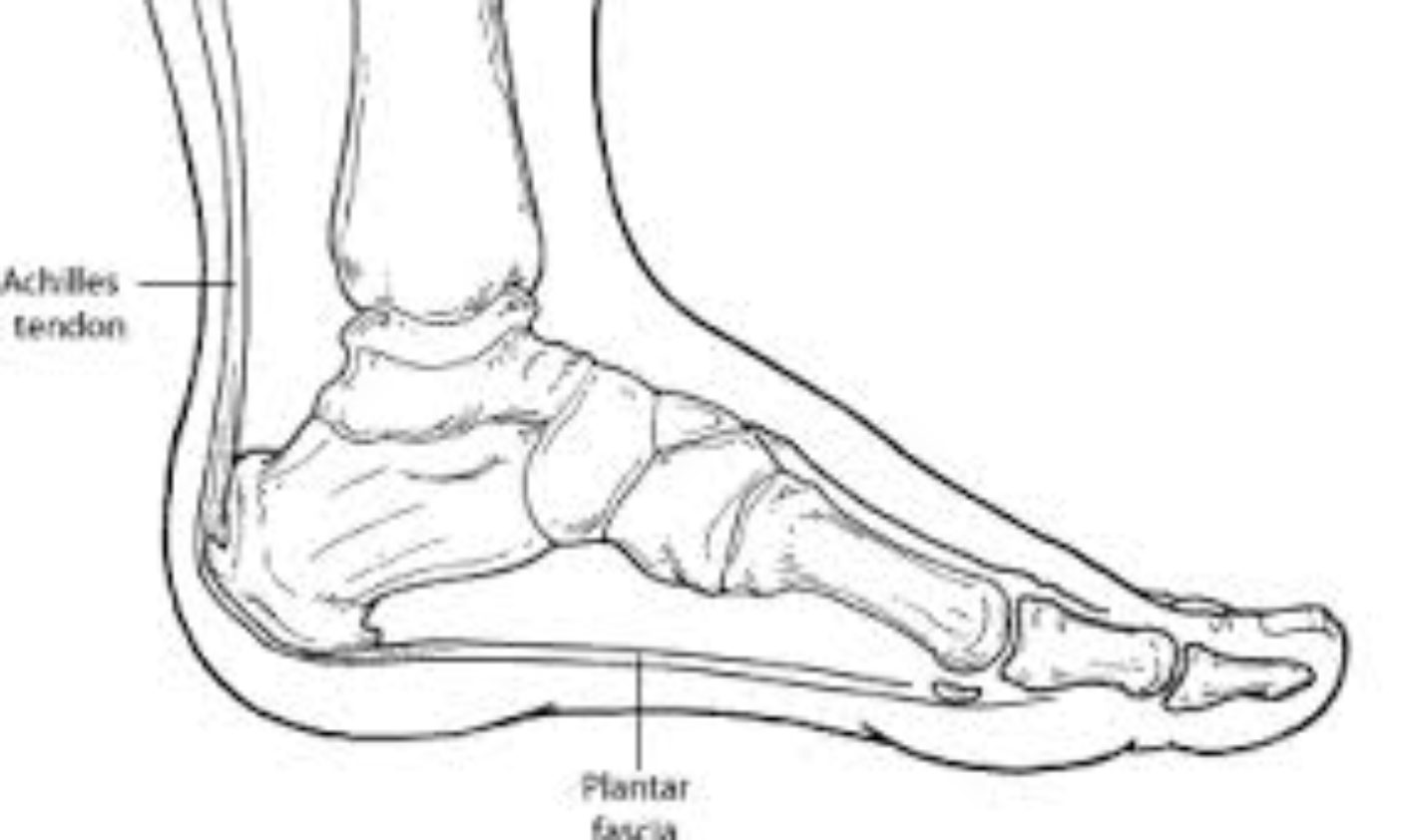 In this new recurring column we take a new look at common running injuries through the prism of the new science of Darwinian of Evolutionary Medicine that informs our work at ChampionsEverywhere. We show how “mysterious” injuries such as plantar fasciitis, Achilles tendinosis and tarsal tunnel syndrome are not so mysterious after all. Read this column if you have mystery injuries and need them fixed. To borrow the words of  Pierre Teilhard de Chardin “Evolution is the light that illuminates all facts, a curve that all lines must follow…”

Let’s take a new look at some old injuries. The new science of Darwinian (or Evolutionary) Medicine focuses on the determinants of optimal fitness rather than concepts of health like traditional medicine. This is a key difference for us as athletes, making evolutionary medicine the more relevant, and useful, perspective to take on injury. Let us begin with an example from “Principles of Evolutionary Medicine” by Oxford Biology. If a recent immigrant from South-East Asia presents himself to a GP, he may be diagnosed with adult hypolactasia – a metabolic disorder, whereas from an evolutionary perspective this man is normal and his condition shared by 70% of the world population. There is no disorder only a mismatch between the immigrant’s new environment and his evolutionary origin. In this series of reviews we attempt to show that running injuries are by and large not true medical problems – but rather manifestations of a mismatch between modern life and modern sport and our evolutionary origins.

We have a very personal relationship to the injury termed as Plantar Fasciitis* here at ChampionsEverywhere. I suffered from the injury for 18 months and many other athletes we know have fallen by the wayside after receiving this diagnosis. The injury began in my case as a burning sensation where the plantar arch (the thick fibrous band beneath your foot) connects to the bottom of the heel bone. Mornings where the worst. The foot would be so rigid and stiff that the first hour was spend hobbling. Over time daily walking and standing became very uncomfortable and running became impossible.

* It is worth noting that Plantar Fasciitis is often diagnosed as heel spurs and viceversa and the symptoms are similar. Arch pain likewise is not always located at the standard site of plantar fasciitis but rather along the ridge of the arch. For the purposes of this article we are discussing pains in the arch of the foot and plantar fascia in general

In the recent three decades, several treatments have been proposed and I tried most of them. All these solutions share one thing in common: they are symptom relief interventions or to use a scientific term – they address the proximate cause of the problem (the pain in the foot) rather than the root cause. This is a similar approach to treating an illness simply by attacking the fever it causes.

When visiting sports doctors and physiotherapists I was prescribed with anti-inflammatories beginning with several weeks of Nurofen before eventually being prescribed with Difene. Both offered no relief from symptoms and I had several side-effects from the drugs such as mood-swings, stomach upsets and lethargy. Other modern suggestions to fix the problem are:

In our experience none of these treatments have any noticeable effect and once you examine the evolutionary background for plantar fasciitis, it becomes clear that there is no reason to expect that it should. Let us begin the journey by studying what the function of the plantar fascia is.

The Plantar Fascia – an Evolutionary view

The plantar arch serves as the first of three lower-leg shock absorption units during movement. As your foot lands on the ground the arch is meant to collapse (or compress). To imagine how this works hold a soft hand (palms down) over a table-top. Now gently slap your hand straight down on the flat surface. You will notice that your hand was cupped while hanging in the air but collapses gently and flattens so that slapping the table feels soft and causes no pain. Next tighten up your hand and try to slap it down on the table top at various position (straight down, bottom of the hand, side of the hand). Notice the difference? Without a collapsing arch you get an impact of “hard on hard” whereas the pleasant “table slap” is “soft on hard”.  When two objects meet the softer object should soften further to absorb the impact with the harder object.

How is this relevant to plantar fasciitis? Consider this – when you are moving through space (over the ground) gravity pulls you down and into the ground. When walking and running you are landing on your feet. Your first point of contact is your foot. Thus it is the role of your Plantar Fasciitis to serve the same function as the cup of your hand when slapping a table – it needs to be soft and relaxed and to collapse in order to make each landing pleasant. In the environment in which we evolved we moved over mixed surfaces – both hard and soft. When walking on soft surfaces are plantar arches would become more rigid and dig into the soft ground and achieve a solid footing before the next step. When walking on hard surfaces it would soften. Every day would see a mixture of demands. For our hunter-gatherer ancestors this was like having an onboard suspension system and this would be our natural environment. Spending our entire day encased in thick rubber represents a fundamental mismatch with our evolutionary origins.

Why Plantar Fasciitis should not occur

If Plantar Fasciitis occurred as regularly in hunter-gatherer populations as it does among modern humans it would have proved such a detrimental handicap that it is unlikely those members of our species who suffered it would have survived long enough to give birth to a new generation. Since the dawn of Darwinian Medicine, we are beginning to understand that whenever a significant part of our population suffer from something that would have made it impossible to survive in the wild (such as nearsightedness) then we are dealing with ailments and injuries that do not occur in our natural environment. Rather they occur because there now is a mismatch between the environment we have evolved in and the environment we live in today. “Why we get sick” is one of the seminal works on Darwinian/Evolutionary Medicine and authors Nesse and Williams comment on plantar fasciitis thus:

Two clues, suggest that plantar fasciitis may result from environmental novelty. First, exercises that stretch the plantar fascia to make it longer and more resilient are effective in relieving the problem. Second, many of us do something that hunter-gatherers don’t: we sit in chairs all day. Most hunter-gatherers walk for hours each day, instead of compressing their exercise into an efficient aerobic workout. When they aren’t walking they don’t use chairs, they squat, a position that steadily stretches the plantar fascia. No plantar fasciitis or physiotherapy for them, just squatting and walking for hours each day. – Randolph Nesse and George Williams, “Why we get sick – the New Science of Darwinian Medicine”

Plantar Fasciitis – what happens to it today

Compare the modern world: if you are like most people you may spend the majority of your day (indeed your life) wearing a shoe with a rubber sole. Some of you may wear thin and hard soles but in many cases you may be walking around on at least 2 cm of rubber (often more). Since the late seventies, footwear became increasingly softer with technologies such as Nike Air leading the way.  For running in particular, established dogma became that you needed the maximum amount of soft material between you and the ground to run safely. Shortly after this dogma was established, running injuries really took off. Was this a coincidence? Arthur Lydiard claims that Plantar Fasciitis was practically unheard off in his experience and at the peak of his athlete’s powers running shoes had very minimal and generally quite rigid and hard soles.

Within the environment of a cushioned shoe, your plantar arch will still continue to try to do it’s evolutionary duty and walking around on foam is essentially similar to walking around all day on a huge rubber mat. This forces your plantar arch to become ever more rigid as it attempts to collapse and secure a firm footing on the malleable sole so your body can stabilise before moving onto the next step. On top of this, it is likely tightened (a state often mistaken for “shortened”) from a lack of  regular squatting, walking, running and other natural movements that we should be performing intermittently throughout the day.

Modern life also tends to induce greater repetition of the same motions. Take a standard training run where you may be executing thousands of steps – every one very similar to the last one. Or you may be working in a standing job, standing in the same position for hours – often with poor posture caused by a sedentary lifestyle outside of work. Posture affects how you load your feet,  so not only is your plantar arch being asked to dig through rubber to keep you stable, not only is it tight and rigid from lack of natural movement – it also has to accept repetitive loading of the foot in the wrong places. Auch! So now you have a very rigid plantar arch, on a foot compressed into a narrow shoe being loaded incorrectly on each step you take as well as the psychological tension created in your system from the prolonged pain. Under such circumstances the pain in the plantar arch will not subside. The temptation is to seek quick solutions such as ibuprofen but we suggest there is a better way, one we have tested and know to be effective.

“Resettle a wild animal back into its natural environment and it’ll begin to heal,” is one of my favourite quotes from the VivoBarefoot coach’s workshops. And this simple formula largely dictates how you can fix the majority of running injuries including Plantar Fasciitis. In practice this means:

This may seem like a lot of effort but in reality the change is easy and pleasurable. The key is to find proper advice to get started and to work with a coach who can take you through the process in the right steps for you. Some runners may not be able to complete a single squat. Working with a coach who understand natural biomechanics will allow you to be progressed at your own pace. Once you have been armed with the right knowledge and training, it’ll be a breeze for you to make the changes in your life to cure plantar fasciitis. This is the ultimate goal: to be free of any need for medical intervention – for life, to be empowered with the skill to solve your own problems rather than rely on experts. Our forefathers could do this instinctively. All we need is to work with people who understand how to remove the mismatch between your current life situation and the environment you were born to live in.

“Nothing in Biology Makes Sense Except in the Light of Evolution” – Theodosius Dobzhansky, evolutionary biologist and Russian Orthodox Christian