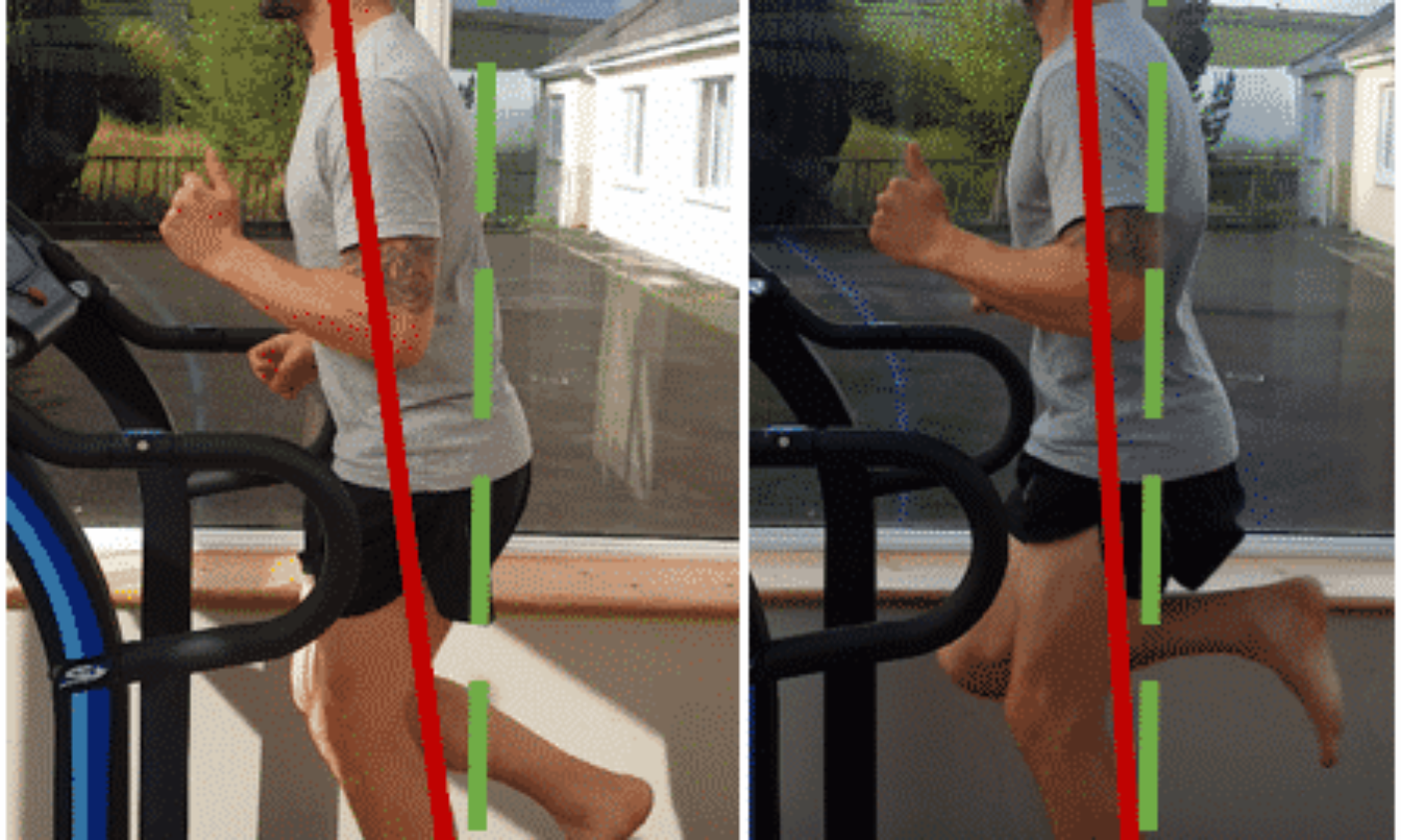 Yesterday’s article began taking a look at a running analysis on Myles Conway, a GAA footballer and Achilles pain sufferer. We looked at the part of the running stride commonly called ‘Initial Contact’. Today we will progress to talk about ‘Mid Stance’. This position occurs shortly after ‘Initial Contact’ and stops when the full weight of the body has been settled over the stance leg. From this point onwards, the body begins to move across the stance leg and the ‘unweighing’ of this leg begins as we move into the heel-off and toe-off phases which we’ll discuss in part 3.

In part 1 we noted important improvements already: the swing leg was nearly level with the stance leg at the time of first ground contact, something considered an important marker across both mainstream and non-mainstream biomechanics interpretations and supported in practice by a correlation between performance and rear leg recovery speed.

Why look at mid-stance?

Mid-stance is important because often this is the moment when people ‘lose control of their trunk’ and a ‘forward rotation’ – visibly recognised as parts of the upper body moving ahead of the pelvis and support leg – develops. This forward rotation of your trunk has a number of negative consequences. As the body is threatening to topple forward, two possible and not mutually exclusive reactions are necessary:

In Myles’ video (image below) we can see this sequence of events in action – we saw in part one a distinct forward lean with an overstride. To get a visual impression of the forward lean look at the position of the red line (forward lean drawn from navicular bone to ear) in relation to the green line (vertical line) and note the difference in how they position on the equally sized yellow arrow.

Another give-away of the excessive forward rotation is the direction that Myles eyes are looking at. Notice that he is not flexing or extending his neck (head position is good in relation to the thoracic or upper back) but the forward rotation shows as his eyes are looking downwards on the left whereas they look straight ahead on the right. Often coaches will try to control posture by telling athletes to ‘not look down’. This can work but sometimes trigger the undesirable reaction of ‘flexing the neck’ to look straight ahead while the trunk still rotates forward – so using our eyes as a guide is not a bullet-proof cue to use without video to check-in on what actually happens.

Implications on the Achilles injury

In our experience the extra time to get into stance is painful for Achilles sufferers because there is more time under tension for the joint and often more torsional (twisting or transverse) forces acting around the joints of the lower limb. The Achilles tendon is not well designed to deal with torsional forces – think of it this way: it prefers to be stretched up and down rather than ‘twisted’. So reducing overstriding as in this example can straight away reduce torsional strain on your Achilles tendon – giving it space to heal.

Secondly, because we lose the ability to re-use the landing energy due to the overstride that will follow from this mid-stance posture (as we saw in part 1), we have to use more muscular contractions to compensate for this loss of energy. This often means using the calves and hamstring to create work through concentric work (shortening). Most Achilles sufferers know that such contractions hurt when you have an injury. In the elastic landing the calves and hamstrings don’t work this way – instead they work isometrically. To appreciate the difference, do this (if you can without excessive pain!):

The second is the ‘isometric’ action and the first is the ‘concentric’ action. The second sometimes feels harder when done statically (because it requires more balance) but in running this isometric contraction is very short and allows you to lose a lot less overall energy and muscle action while making your lower legs more elastic.

If you’re not currently injured you can repeat the test by trying to jump up and down by actively contracting your calf muscle (think about straightening your ankle) or by keeping your ankle in a neutral position while maintaining just enough muscle tension to be elastic. The latter is what will happen in running when we don’t overstride whereas the second is what happens in most cases. If you have Achilles pain you can easily see which one will serve you best in the long-term! Over-worked calves = Achilles pain and damage. But always keep an eye on the ‘cause’ of calf pain (over-stride) rather than just the calf pain – failure to do so leads to a tendency of constant symptom treatment and more therapy sessions than are necessary. If we use muscles in ways they are not designed to – they WILL complain.*

* Don’t get us wrong – a session of neuromuscular therapy or similar on calves so abused can be very helpful but it will not get to the root of the problem. At most you will get 5-10 days relief. Such treatment needs to be accompanied by the running retraining for long-term benefits.

The role of stability here

Quite often the forward rotation is a result of reflexes kicking in – when the body feels unstable, it tends to select a postural control strategycalled a ‘hip strategy’ which looks like a rapid bend at the hip as if to ‘catch’ yourself. The quickest is the ‘ankle’ strategy but if this fails to create the stability needed, the body moves on to the hip strategy. So when we see evidence of a hip strategy (as we do in this example), it shows instability at the ankle and foot.

Avoiding this instability requires a few things to be in order – first of all the body’s first lines of defences must be in order namely: the preflex system (a system of muscular co-contractions independent of the nervous system which begin activating 0 ms after initial contact) and the proprioceptive system (the system sensing your body position and incoming forces and begins activating at 25 ms). Secondly the ‘structure’ of the body must be fully functional – so your foot needs to be a stable platform. If these systems are brought in good order then the body will sense a stable platform and avoid triggering the damaging hip strategy.

During the session I did assess Myle’s feet which had mild Morton’s foot on both legs which makes it more difficult to create a stable platform to land on and is another contributory factor in Achilles injury because it will increase the twisting forces around the tendon. Foot drills coupled with static balance work and then running-specific dynamic work will both fix the foot and bring the preflex and proprioceptive systems ‘back in the game’. Morton’s foot is reversible in the majority of cases and the preflex and proprioceptive systems are extremely trainable.

Next: In part 3 we’ll look at the next two key frames – heel-off and toe-off before completing the picture in part 4 finally delving into the role of the hip and lower back in all of this as well.