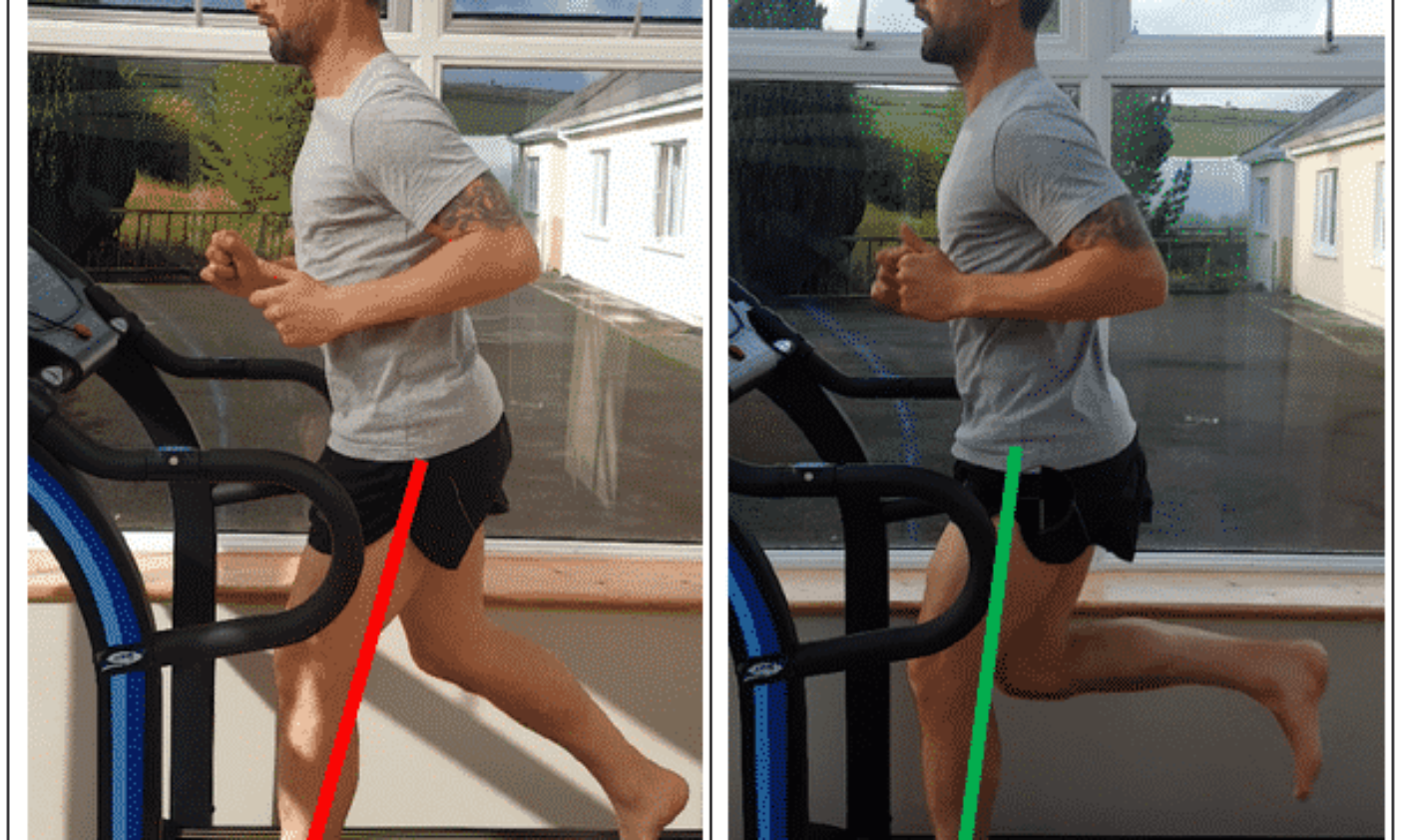 Myles Conway is a former Wicklow County footballer and he kindly allowed me to share his story so far and the results of our first biomechanical assessment a few weeks back. Myles related a familiar story to me of having tried pretty much every intervention and therapy under the sun from the mainstream to the less-so without being able to get rid of his Achilles pain.

He has stayed active in Laragh GFC’s impressive season but limps after training and matches and cannot train at the level he used to nor run long distances.

Now, on paper, anyone who has competed at a high level is an ideal candidate for retraining not because they have superior natural abilities but because they have a proven track record of applying themselves in a systematic and disciplined manner to a process of improvement and that is the key to success in any system.

Let’s have a look at a few frames and I will comment on the improvements and the relation to the Achilles injury in particular as we go through this series.

The intial contact phase is one of the easiest to assess because its unambiguous wehn it occurs – the moment any part of your foot touches the ground ‘initial contact’ has occurred. How we arrive in this phase provides massive clues to where issues are and what injuries the runner is suffering from and why. Sometimes it can also tell us the opposite story: how you run may be a result of a current pain (for instance if you have a blister on your left foot, you will not stay as long on that foot usually).

It’s important to understand there is no weight on the front foot yet – we’ll explore what happens once that occurs in the next article when we’ll talk about the ‘mid-stance’ phase. 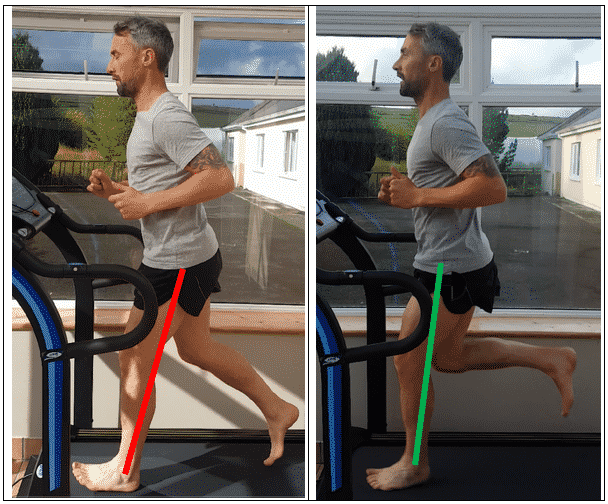 Most movement teachers and contemporary running technique coaches consider posture the most important element to analyse although opinions on what means what and what is ideal posture differs somewhat. As a layman – or fellow coach – you may notice that Myles’ has a distinct forward lean on the ‘before’ frame which is a contributory factor to the main issue highlighted with the red line:

The inability to stay upright in the before frame causes the overstride because the foot must catch up with the point of furthest displacement of the body as it moves forward – its essentially a ‘stumble reflex’.

Structurally the root cause of this sequence of events (which you’ll see more clearly in subsequent articles) is tight hip flexors which bring about an anteriorly tilted pelvis (which looks like a ‘butt-wink’ with  curve in the lower back). This poor position of the pelvis and lumbar area causes the forward leans which again causes the overstride.

By comparing the red line with the green line (both lines are drawn from the navicular bone to the rim of the shorts), you can clearly see the force is directed more ‘backwards’ (a braking force) before corrective training which reduces economy. In the second frame the force is directed more vertically causing less braking and a better angle for capturing elastic energy.

Just as importantly the newer more upright posture facilitates this better landing together with the quicker and more efficient recovery of the rear leg. The higher foot-carriage means the lower of the lower leg is shortened allowing it to swing through faster. Where the rear leg was more than a fist behind the front leg in the ‘before’ frame it is now almost ‘touching’ the front leg. Quick front leg recovery speed is a major performance indicator in distance running.

What you can’t see

In the before video from which the frame is taken Myles’ cadence is 168 – too low for recapture of elastic recoil in most circumstances – whereas in the after video it has increased to 180 strides per minute. We utilised a combination of mobility drills, posture work, elastic jumps and drills to correct the retrieval of the rear leg to get to this picture.

While it requires a careful process to get an athlete from the ‘before’ video to the ‘after’ video, the really difficult road begins afterwards as the new pattern has to be bedded in. I will try to elaborate on the road ahead in the fourth part – in the next part we’ll talk about mid-stance and in the third part about toe-off and heel-off – before and after.

So can he run straight away through his injury?

Before we do that a caveat: this is an active Achilles injury in this scenario meaning that it does not immediately respond positively to running even with strong technique. However, Myles’ first goal was simply to see the season out while managing the symptoms and then looking at a longer-term retraining process after the final game of the season. As part of the immediate retraining, we therefore implemented elastic jumping exercise. This progressed very well – with Myles able to do 3 x 3 minutes fairly quickly without irritating the Achilles. Such a rate of improvement usually means running can be done fairly soon after the new technique is trained.

We always want to do the retraining of technique as this is what will keep the wolf from the door in the future. But where tendon damage or severe inflammation is still active, the training roadmap does not always include running straight away but instead exercises that are specific to improving the running technique while the injury fully heals. What we NEVER advocate is simply doing symptom treatment and then leaving technique alone. Do this and your injury – or some other breakdown – will return at some stage in the future. Put simply: certain injuries are at a stage of progression where ANY load will be damaging. After that tissues tend to tolerate slow loading (but here it’s important to be sports specific as soon as possible) and then elastic (quick) loading – which is jumping and running.

In part 2 we will look at the next frame of interest the ‘mid-stance’ before moving on to ‘heel-off’ and ‘toe-off’ in part 3.

This weekend prior to this article being written Myles scored some decisive points when he nicked a goal in Laragh GFC first Junior ‘A’ Final for 27 years as they took victory over Kilcoole – so a big congratulations to Laragh GFC and Myles on this performance.