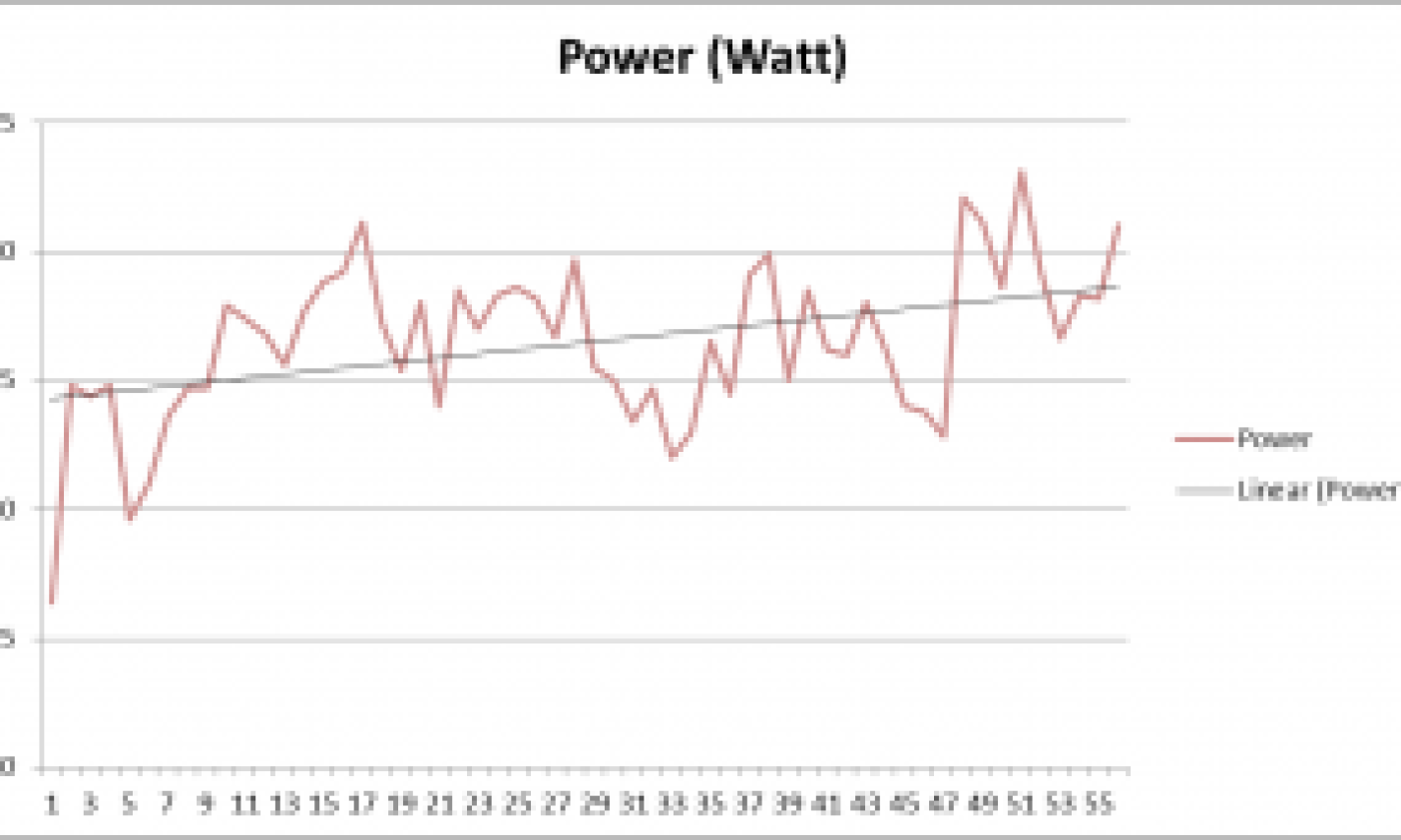 A few month’s back I decided to renew my love affair with a gadget I owned a few years ago: the POWERBreathe, first of a new generation of “inspiratory muscle training” (IMT) devices, or in layman’s terms a gadget that allows you to train the muscles responsible for getting oxygen from the air and into your lungs where it can be diffused to the working muscles.

The company POWERBreathe were among the first producers to latch onto the increasingly convincing evidence that had been emerging over the past 20 years for the benefits of specific training of these “inspiratory muscles”. I reviewed the data at the time and was sufficiently convinced to buy one of the early models a number of years back (a device I sadly lost). Using the POWERBreathe coincided with my best season in competitive terms, and overall I felt more fatigue resistant during this period, particularly in high-intensity races. So when I heard of the new POWERBreathe Kinetic series, a new digital model providing intelligent feedback on your training, I could not resist temptation to invest in it as an attempt to restore the competitive advantage I believed the original model had given me. Having experienced a number of frustrating years with injury, I reckoned that I now need every single advantage I can get.

Before reviewing my experiences with the new POWERBreathe Kinetic, I want to take a step or two back and explain why this seemingly strange training form has relevance to endurance athletes. The best source of information about this topic today is the recent book “Breathe Strong, Perform Better“, published by Human Kinetics, and written by Allison McConnell, a PhD in respiratory physiology and inventor of the original POWERBreathe. Her close ties to the product may make her biased in the eyes of some, but make no mistake, her academic credentials are impeccable and the POWERBreathe is designed based on decades worth of research.

Some of the studies in her book show that after most endurance activity, the strength of the breathing muscles can be reduced by 15% or more. As the breathing muscles fatigue and the load on them increases, oxygen rich blood is diverted to these muscles to maintain necessary breathing. The inspiratory muscles also play an important secondary role in postural stabilisation, something that is particularly important in contact sports where weakness in that area often leads to injury. Fatigue of the respiratory muscles likewise results in a deterioration of posture and loss of efficiency of movement for all athletes. Strengthen these muscles and they will fatigue slower, divert less blood-flow from other working muscles and stabilise your body more effectively leading you to maintain better efficiency of movement throughout your event of choice.

Unfortunately, the only modalities of normal training that stress the respiratory system to a level where they can grow stronger are extremely intensive work that is almost intolerable for any length of time (such as several maximum sprint efforts with little recovery). The majority of endurance training will happen in the comfort zone of the respiratory muscles and create little strength gain in these muscles. With this in mind, POWERBreathe created their inspiratory training device which looks essentially like an asthma spray. The new Kinetic model sports a digital screen and acquires an almost “tricorder”-like feel (for those familiar with Star Trek).

How the device works

Using the POWERBreathe is simple and is fully explained on the accompanying DVD and also in the user manual. You pop the POWERBreathe in your mouth, put on the nose-blocker included with the package and choose the “Start” option on the digital screen. Next you essentially take 30 long deep breaths focusing on breathing as hard, deep and fast as you can while exhaling slowly. The Kinetic model automatically matches your performance against the best level of resistance based on your previous performances (it is a bit like breathing through a straw). At the end of each repetition, the POWERBreathe beeps to help you keep the right rhythm and a few quick beeps at the end mark the completion of your thirty repetitions. This routine must be completed twice per day: I do it once in the morning and once in the early evening.

The exercise leaves me quite flushed and fairly out of breath for a little while and the feeling is comparable to the type of sensation you would have after running a hard 400m repetition on a track or similar short and hard effort. The real beauty is that you can now go to the “Results” part of the menu and look at how well you performed the exercise getting the same level of feedback on your work you would expect when lifting weights or timing your running, cycling or swimming.

Since you are not lifting weights as such, your training results are recorded using the following four measurements:

So how did I get on? Well, I had a short blip after using the POWERBreathe for about two weeks. I caught a respiratory tract infection and had to take antibiotics to cure it. During this period I did not risk using the device and I suffered a noticeable performance decline for a while after resuming the training. In total I have completed 56 sessions so far and seen gains as high as 28% in terms of LOAD and 57% in terms of power.

Other very useful features of the POWERBreathe is that it allows you to measure your absolute lung volume helping you understand what potential you have to increase your VO2max (maximum oxygen consumption) over time. My best performance in such a test (with PeakHealth) I was measured as taking in about 4.5 litres of oxygen/minute but the POWERBreathe tells me that my lung capacity is at least 5.2 litres of oxygen/minutes. This way I can see that I am able to take in much more oxygen than I can currently effectively use. This is because of a lack of capillarisation to the working muscles as not sufficient aerobic training has been done. To imagine this by metaphor: I have enough goods coming into the central storage unit but not enough trucks to distribute the goods out to the customers.
Performing this test and getting a glimpse into your own physiology is simple, you just choose the “Test” option in the menu and take one big powerful breath. Once you are satisfied that was your “best breath”, read the result and record it down as your current maximum lung capacity.

So does it work? Well, by reading off the data and entering it into Excel, it certainly seems like it does, as I will try to illustrate in the below graphs based of data from the first 56 sessions. Notice how I start off very low for the first few sessions as I am getting to grips with the training and how a slight plateau appears midway (and even a decrease in performance) as I recover from the chest infection yet overall performance is increasing gradually.

The first graph shows how my average power increased over the course of the 56 sessions from under 15 Watts to over 20 Watts. Then I hit the plateau recovering from illness before climbing again and managing my highest power outputs yet closing in on 25 Watts. 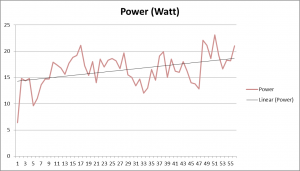 The next graph shows the level of resistance I have overcome with each breath, here my I initially managed less than 60 cmH20 before beginning to produce measurements well over 80 (with a best of 86 cmH20). 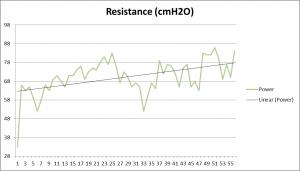 Finally, average lung volume per breath shows a marked increase although this should be expected to plateau soon as I am closing in on my maximum lung size (the lungs have a fixed size which cannot be increased after adolescence). At the time of this writing I am able to take in 5.1 litres/oxygen on average for a full 30 breaths which is close to the maximum recorded for one breath so far. 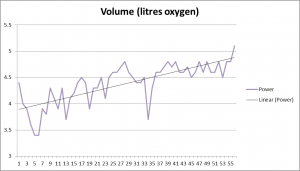 So science tells us that inspiratory muscle training works and there is much to suggest that POWERBreathe have one of the best products on the market, yet is it worth the purchase?

Let’s start with the few negatives, beginning with the greatest impediment for purchasing a POWERBreathe Kinetic: the price. A PowerBreathe Kinetic K3 such as the one I purchased for testing retails for around £299.99, or the price of a basic laptop computer. Few people will probably feel comfortable with an investment of such magnitude. Fortunately, this is the top of the range model and both the K1 and K2 can be purchased cheaper. If you want to avail of the benefits of this type of training but cannot contemplate spending several hundred pounds, then the best option is to shop for the POWERBreathe Classic and Plus series which retail for £50 and less. This means giving up on the guided training and ability to measure your performance precisely but with the right tracking and discipline, most athletes would still be able to set up strong workouts for themselves.

This brings us to the only other thing I had issues with regarding the POWERBreathe Kinetic 3: the top of the range model has several alluring features such as the ability to view a history of all previous sessions but it does not offer any way to export this data to your computer. Instead you have to manually type out the data into a spreadsheet to analyse it. I consider this such a basic feature that it should be part of a technical device worth several hundred pounds and I hope POWERBreathe will improve the integration with computers for upcoming models.

Most importantly: it appears to work and allows you to add another string to your performance bow that cannot effectively be trained in any other way. Think about a magic drug, in a way a POWERBreathe is a bit like a legal performance enhancing gadget. If you can justify the spending and every single percent of performance is important to you, well then you need to train your respiratory muscles as well and in that case, the POWERBreathe Kinetic 3 is like having an expert trainer at hand at all times to run you through the best possible session for that type of training. POWERBreathe also sell a series of DVDs on how to combine the device with functional strength training to learn how to control your breathing while exercising for those who want to take it a step further.

A very useful feature for competitors is the warm-up and cooldown function which allows you to gently warm up your breathing muscles or drive lactic acid from them after exercise by performing 30 breaths at an easy resistance. While it can look a bit dodgy to inhale from a strange asthma spray before events, I do find it helps my lungs be ready particularly for very intense racing of 5 km distance and shorter.

The device has an elegant design and looks like a medical device, needs only minimal regular cleaning and comes well-supported with the instructional DVD and user manual. I ordered mine off Amazon.co.uk.

[rating: 4/5] Probably the best respiratory training device on the market but very high price level and lack of PC integration knocks off a star.

← Arthur Lydiard – who was he?
Medium Long Runs →
X