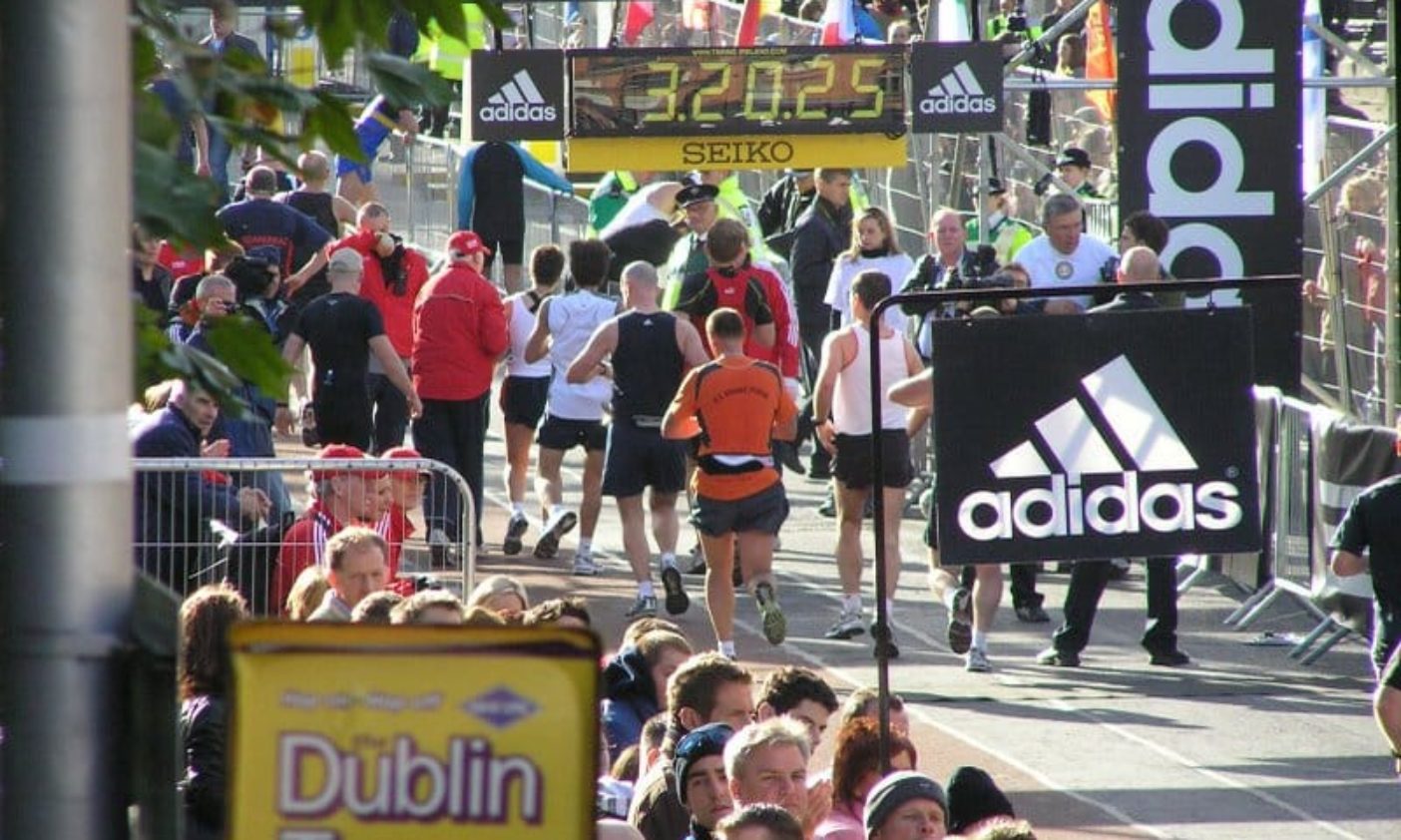 There’s probably nothing more dangerous than generalized advice if it’s used without adjustment to your individual situation and expeirence.

Recently I have been hearing runner’s I train vocalizing similar fears and doubts to those I remember having when I prepared for my first marathon. I was lucky in many ways: my first marathon build-up happened under the guidance of a coach I had hired who was also a physiologist. She progressed me slowly and patiently and every three months or so her laboratory blood tests could show me that – without a doubt – my fitness had improved. Doubt about her methods never lingered for very long. The two biggest gremlins in people’s ears seem to be when other runners hear about their training and say thing such as ‘oh, I’d be doing more mileage than that’ or ‘your longest run needs to be longer’.

The key word in the first question is ‘I’d‘– as runners we often forget that what WE would do is next to irrelevant for another runner. You may be similar in what you need or completely different. The second statement assumes we all need the same – that there is ONE RECIPE that must be followed. Ok, you cannot a Bearnaise sauce without the vinegar but for training humans such a simple logic does not apply – you can succeed in the marathon whether you run a 20 or 22 mile run or not and you can fail in the marathon running a 20 or 22 mile run as your longest run. Let me go back in time a bit to when I first made this realization (with help).

I am going to tell you a practical tale here rather than going through research studies. However, this tale involves scientific testing of the training progress during a program that included neither high mileage nor long runs yet resulted in a strong marathon performance and recording of the exact adaptations to fitness that you need to get from ‘marathon training’.

Seeds of the doubt

During this first build-up – where my original goal was to run a sub-3:30 – the laboratory tests eventually predicted 3:20 a few weeks before the race and I ran 3:18. The surprising features of the plan was that my longest run was no longer than 20.2 km and my overall volume of training was far lower than many would expect to need to do.

Now, don’t get me wrong, some people must eventually work harder to run 3:18 and some people can run faster than that without doing almost any training at all. That’s down to how big the initial genetic bank account and previous sporting experience of the runner is. What’s important is to evaluate whether the training done realized the current potential of the runner.

At the time I was an 18:48 5 km runner – a time I had run in my first 5 km road race a few months earlier – but otherwise had very limited experience with roads (I had run 1:38 for my first half-marathon in Achill and at the Clonliffe 5 miler  32:40. Those performances are quite varied from predicting VO2max of 46 (half-marathon) to 53 (5 km). Normally in those circumstances you’d look to compare with your recent half-marathon – and a marathon performance of 3:18 happens to be an improvement on that ( What’s was more important was the laboratory results which showed that when I began marathon training in August, I was barely in the shape to run 3:30 and by the  end I was in shape to run sub-3:20. So the training was sufficient for a response. If we look at my mileage in the last 12 weeks (in kilometres!): 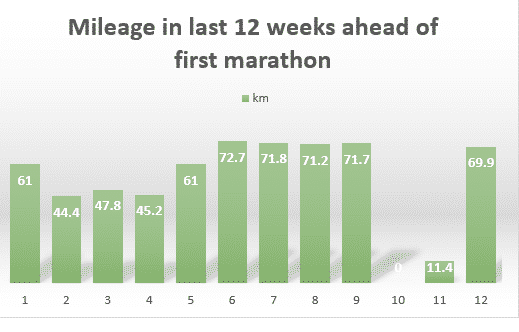 Hardly massive and in fact the first 5 weeks will be surprisingly low to many – only weeks 6 to 9 were very consistent and my taper was enormous – I had to take week 10 off with injury and barely ran the week after. The 69.9 are the marathon itself (42.2 Km) and a race I stupidly did six days later (suffering plantar fasciitis which would bug me for 18 months – don’t do it!).

In many ways this is certainly not a plan you should copy (I did 10 races during those 12 weeks leading into the marathon) but it showed that high volume and lots of massive long runs are not necessary to get the job done, let’s look at my long runs as a proportion of weekly volume: 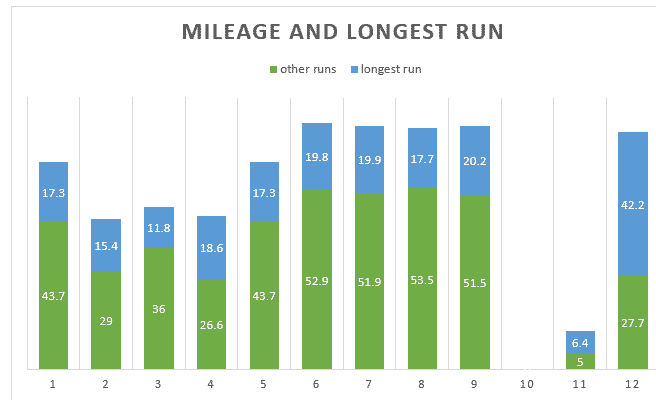 No 20 or 22 mile runs not even a logical solid progression of ever longer easy runs. The longest single run was 20.2 km or about 48% of the marathon distance!

You can take four observations from this:

No doubt I would have struggled to cope with more than this as I was already having some injuries and illnesses in the run-up. Training too little is also a problem but most people do too much too soon because they compare themselves to others – more developed athletes.

But were you ACTUALLY properly prepared?

Another consideration is how the marathon developed – if pace drops off badly at the end it either shows 1) poor pacing or 2) insufficient endurance build in the training. So, if my pacing was very bad we can assume that my endurance adaptations were too poor (in fact, laboratory experiments had already ruled this out as my lactate level had reduced from 4 to 2 millimols per litre of bodyweight per minute over 3 months).

In fact the opposite happened – I completed the race exactly as someone with a huge endurance base would have been expected to do: On the second half of the marathon I ran 1:37:02 beating my personal best for the half-marathon by 1 minute and 34 seconds and my last kilometres was run 4:07 minutes – by far the fastest. When a runner has ‘plenty of talent’ but not enough training done it usually shows up as a massive drop in pace in the latter half of the race.

Behind me that day were many runners disappointed with their performance who had done the 20 or 22 mile runs (and also many who hadn’t!). Simply because: your marathon success or failure does not rest on something as simple as whether you complete such a run or not.

The logic behind the 20 or 22 mile run is pretty sound on the surface: if you want to run 26 miles then you should be able to run 22 or 22 miles in training. In most distances you have the advantage of being able to run well over the distance of the race, but only top elites regularly use any overdistance runs for the marathons and even these superb physical specimen do so sparingly. Some old school coaches like Percy Cerutty wanted people to be able to do 30 miles easy before they could race 26.2 miles. Again – very logical but only if you accept the whole process – Percy expected you to be able to cope with a grueling six months of pure conditioning work peaking with the easy 30-mile run. Very few runners enter their marathon program off the back of such preparation. If they attempted a 30-mile run in their 12 or 24-week build-up, they’d be so knackered by the time of the marathon they could not perform.

What’s forgotten, however, is that a big part of the 20 and 22 mile idea is down to psychology of fear. People doubt their ability to cover 26.2 miles without having a very tangible proof they can go close to the distance. THAT is understandable, and we sometimes allow people to do one longer run of such length (even if it’s a stretch for them) to get that psychological barrier laid to rest. Many athletes are happy to trust us that it is not necessary, however, because they understand SUPERcompensation. This means your body builds in ‘extra’ adaptations to cope with the challenges you present. So you do not need to run 22 miles for your body to be able to run 26 miles. In truth many of us can do it any time – if someone put a gun to our heads and said ‘complete it or I pull the trigger’, most of us can already do it. Naturally there is more to it than ‘just completing’ – which is why the RIGHT level of training needs to be done but that does not necessarily mean ‘high mileage’ and ’20 mile long runs’ from the get-go. That’s simply a rule of thumb that doesn’t apply to many people.

Using prefatigued runs (meaning doing endurance runs before tiredness from previous runs is 100% done) and fasted state runs (running before breakfast) also allows us to get a lot of the same adaptations as super-long runs with more medium runs.

What we’d do for you

The principle we coach by is that you should almost try to get ‘the most out of the least’ – to paraphrase a coach whose name I have forgotten ‘it’s pretty stupid to run sub-3 hours for the marathon on 100 km if you could have done it on 60 km’. Why? Because the more mileage, the higher the risk of injury and burn-out and more needs more. Once your body has adapted to a certain level of stimulus, you need to find a way to make that even more to progress further. You want to keep volume in reserve for a long career of steady development. My guess is that a lot of runners who underperform and believe they undertrained were actually overtrained.

All this may seem at odds with our Lydiard-philosophy being famous for 100-mile weeks and 22 mile runs. For starters: these numbers were for his Olympians (and they didn’t always achieve them) and secondly, there is a patient road to be traversed from wherever you are until you reach 7 days of regular running – at least if you like your tendons and want to walk properly when you have grandkids.

So, if you come to us and your current average is 40 km per week then that’s where we start. We build up slowly from there. If your longest run was 90 minutes, then we start from there. We don’t bump you up to 22 miles if there is no time to do so gradually and nor do we tell you ‘oh, I’d be doing more mileage than that’. If you are running so little that you would put your body at significant risk by running the marathon, then – well – we’d tell you too and suggest a longer build-up period.If you haven’t done as high mileage as someone who is in your ear – don’t worry.

If you haven’t done a single 20 or 22 mile run. Don’t worry. All that matters is that you did the right level of training for you and there was a good amount of endurance style low-intensity running where you got some fat burning going. Apart from that basic formula the most successful marathon formula is individual – especially for beginners who are not chasing marginal gains and thus do not need high risk training plans.