As those following our recent podcasts with performance nutritionist Barry Murray now, we are not too keen on supplements but we have been making an exception for beet root juice for a few reasons. 1) It’s not really a supplement but a food – as the only ingredients are beet root and lemon juice and 2) the science behind is unusually solid.

“Beet It” is healthy product made of beet root juice specifically targetted at athletes.  You could describe it as a natural healthy “EPO Boost” looking at the findings and the original researchers were unusually hyperbolic in their praise:

This is one of the sports nutrition stories of the decade, I think it is one of those discoveries, for want of a better word, that transcends, it’s not just performance, it has a health implication and application as well. – Professor Andy Jones, University of Exeter 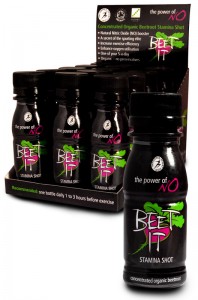 The modest beetroot may be one of nature’s true ‘superfoods’ with qualities of particular interest to athletes. The Beet It products take advantage of these qualities and the most practical product for athletes – the 7 cl Beet It shot – attempts to match the needs of an endurance runner. Easy to carry and with a pleasant, and not too “beety” taste (from being mixed with an equal portion of lemon juice), this concentrated shot packs the same amount of beetroot as a 25ml glass and there are no additional ingredients – just the concentrated organic beetroot and lemon juice.

Following on from the shots, Beet It recently launched their ‘Beet It’ bar which is basically a flapjack with Beet It juice. Going by the recommendations given on our recent ‘Optimise Performance’ course, athletes who are looking to fat adapt should never eat a bar in the 1-12 hours  before a workout, as recommended on the label, but instead use it only after workouts, and preferably only substantial ones (longer runs, high intensity work). If you are fighting chronic inflammation or other inflammatory symptoms, then you may also have to be wary of the oats and stay with the shots. The bar contains rice syrup, sugar and sunflower oil – three ingredients you’d ideally like to be without or at least need to know more about the quality and processing of before regularly putting it down your mouth. Taste-wise its on the ‘salty-sweet’ end of the scale and will agree with most people – but not beet haters!

How does it work?

Beetroot provides a natural source of a molecule called nitric oxide (NO3). Attention first came to this “miracle molecule”, as it was dubbed in marketing speak, in 1998, when the Nobel Prize for medicine and physiology was awarded to Robert Furchgott, Louis Ignarro and Ferid Murad for proving that this previously esoteric molecule plays a crucial part in human health helping protect the heart, fight off bacteria, stimulate the brain and regulate blood pressure.

In later years, research into beetroot juice ingestion conducted at the William Harvey Research Institute and Exeter University has demonstrated the dramatic impact it can have on improving stamina and enhancing oxygen usage efficiency. These benefits arise directly from raised nitric oxide levels derived from the dietary nitrate found naturally in beetroot. The shots are a natural way to boost nitric oxide levels in the blood stream and as a result, our Beet It stamina shots are increasingly being regarded as a new super-fuel for athletes.

Beet It stamina shots also carry the logo of Informed Sport ensuring rigorous testing from contaminants – an important concern for higher level competitors and anyone else liable to be doping tested.

What the research says

Cynicism is natural about any new product claiming to enhance performance but in the case of Beet It, the scientific research is extremely promising. When reviewing Beet It, we were sent six research studies conducted between 2009 and 2011. Here are some of the highlights extracted for you:

During exercise at a fixed moderate work rate, increased NO3  intake resulted in improvements in NIRS-derived indices of muscle oxygenation and a significant reduction in pulmonary O2. It should be stressed that the remarkable reduction in the O2 cost of sub-maximal exercise following dietary supplementation with inorganic nitrate in the form of a natural food product cannot be achieved by any other known means, including long-term endurance exercise training (1, 15, 49, 65). Although not directly tested in the present study, the results suggest that increased dietary NO3 intake has the potential to enhance exercise tolerance during longer-term endurance exercise. (Sports stamina Exeter 2009)

In layman’s terms: at moderate work rates, beetroot juice intake resulted in greater muscle oxygen uptake and reduced oxygen cost beyond what can be achieved by any other known means including long-term endurance training.

A 2010 follow-up study in the Journal of Applied Physiology showed how beetroot supplementation both lowered systolic and diastolic blood pressure and that VO2max and peak power output in training showed elevation after 15 days of beetroot juice intake. They put forward a fascinating theory showing how the nitric oxide may lead to proliferation of the mitochondria, or “little energy factories”. This finding is particularly exciting for us endurance athletes as these energy factories are the power source of your slow-twitch muscle fibres and a key part of optimising your aerobic energy system.

A later 2011 study, looked at the performance of trained cyclists in a 4km and 10 mile time trial and showed an improvement in their performance after a single serving 2.5 hours before exercise by 2.8% (4km) and 2.7% (10 mile time trial). For runners, this scale of improvement would be similar to taking 1 minute 7 seconds off a 40-minute 10km time.

Application for health and improvement of performance at altitude

If health is your primary concern some studies showed clinically significant improvements for cardiovascular diseases such as PAD (Peripheral Arterial Disease) which affects ~27 million people in Europe and North America. Interestingly for climbers and athletes living or training at altitude, beetroot juice ingestion increased the tolerance to high-intensity exercise in an oxygen deprived environment by ~21%-25%! For more findings, follow the link below.

For a local perspective on Beet It, I forwarded the research to Marianne Walsh, PhD in nutrition at UCD, and while discussing the research she expressed that both the studies and the results were very impressive and that the natural healthy juices contained in the product would be beneficial for everyone, even without considering the additional benefits described in the studies.

When asked whether Beet It taken,as recommended, 2.5 hours before exercise would risk creating a sugar-spike to the detriment of fat-adapted athletes, Barry Murray expressed that the total content of glucose is likely too low to have any detrimental effect.

If you prefer video you can watch Professor Andy Jones speaking about Beet It here.

When should I take it?

To take advantage of the lower oxygen cost of exercise from beetroot juice, you should ideally take a shot in the 2-3 days leading into a competitive race although benefits of up to ~5% reduction in oxygen cost are seen within 2.5 hours of your first ingestion of the shot. After 5-15 days of supplementation a significant improvement in VO2max was shown in studies, so regular supplementation is recommended to get maximal results.

For the positive training effects at altitude three servings were used: 24 hours, 12.5 hours and 2.5 hours before exercise, although the researchers believe a smaller dose may show similar effects.

Anecdotally, a rider in the recent Ras experimented with taking 2 shots per day during the stage race. While he couldn’t pin it down to Beet It he felt better recovered and as if ‘he had an extra gear” late in each stage.

Beet It in the media

Backed by such impressive findings the product has attracted a lot of very positive reviews over the last year such as in the news stories below: